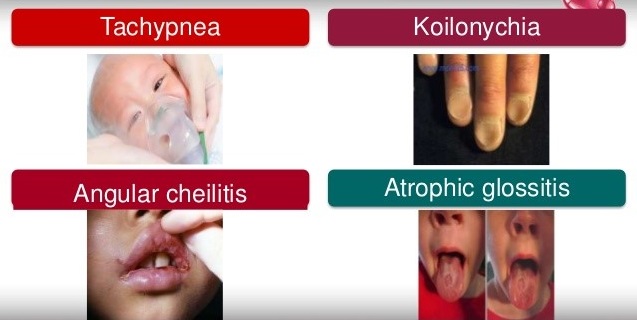 Children are very exposed to anemia. In this text you can find information about signs of anemia in children.

Anemia is a very significant health problem around the world, especially in children`s age. In 2011. WHO published that approximately 300 million children globally had anemia. Anemia is a condition in which the amount of red blood cells or their oxygen-carrying capacity is insufficient to meet physiologic needs. It can happen because our body is destroying red blood cells, or losing too many red blood cells (due to excessive bleeding from an injury or surgery), or producing red blood cells too.

The most common cause of anemia in children appears to be the deficiency in iron, which is an essential nutrient for both cell growth and the development in the neural and immune systems. Iron deficiency can originate from inadequate intake or absorption of dietary iron, blood loss or increased need during the growth period. Iron deficiency anemia is the most common in children due to their increased iron requirements in the periods of rapid growth, the first year of life and adolescence are the two groups of children especially disposed to anemia. As a result, a child with iron deficiency may have learning and behavioral problems.

Except for iron deficiency anemia there are many more types of anemia, but in children`s age some of the most common are:

-Sickle cell anemia is a type of hemolytic anemia, it`s an inherited type of anemia with an abnormal shape of red blood cells

What are common signs of anemia in children?

Most of the signs of children are due to lack of oxygen in the cells. Early symptoms of mild anemia are usually skin paleness, the decreased pinkness of the lips, the lining of the eyelids or nail beds. Skin paleness can also manifest like grey or “ashy” skin. These symptoms might be slowly appearing in the beginning, so they can be difficult to notice.

After this early first symptoms, other common signs show up, which include:

Children with severe anemia may have some of the additional signs and symptoms:

This type of anemia develops over time. Firstly, the amount of iron in the body rapidly goes down and the child starts to have iron-deficiency. In this stadium muscle and brain function are endangered. At this point, the red blood cells don’t change much, because the body uses most of its iron to make hemoglobin. In time, all the iron gets used up, and the body starts making fewer red blood cells, this is the point where the body becomes anemic.

At this point, symptoms and signs may be:

Other signs of anemia in children

In rare cases, a child with this type of anemia may develop “pica” (pronounced pie-). This condition is described as a craving to eat nonfood items such as dirt, clay, chalk, cornstarch. It should be not harmful unless the child eats something toxic. “Pica” usually stops after the anemia is treated, and as the child grows older, so there is no need to worry.

Anemia due to excessive destruction of red blood cells in children can cause jaundice (yellowing of the skin, eyes, and mouth), an enlarged spleen or liver, and dark tea-colored urine.

The signs of anemia in children may sometimes look more like other health conditions or blood problems. Anemia is often a symptom of another disease.

Even non-severe anemia can affect a child`s focus, energy and ability to learn. So it is very important to take your child to the doctor as soon as you notice any of these signs or symptoms.