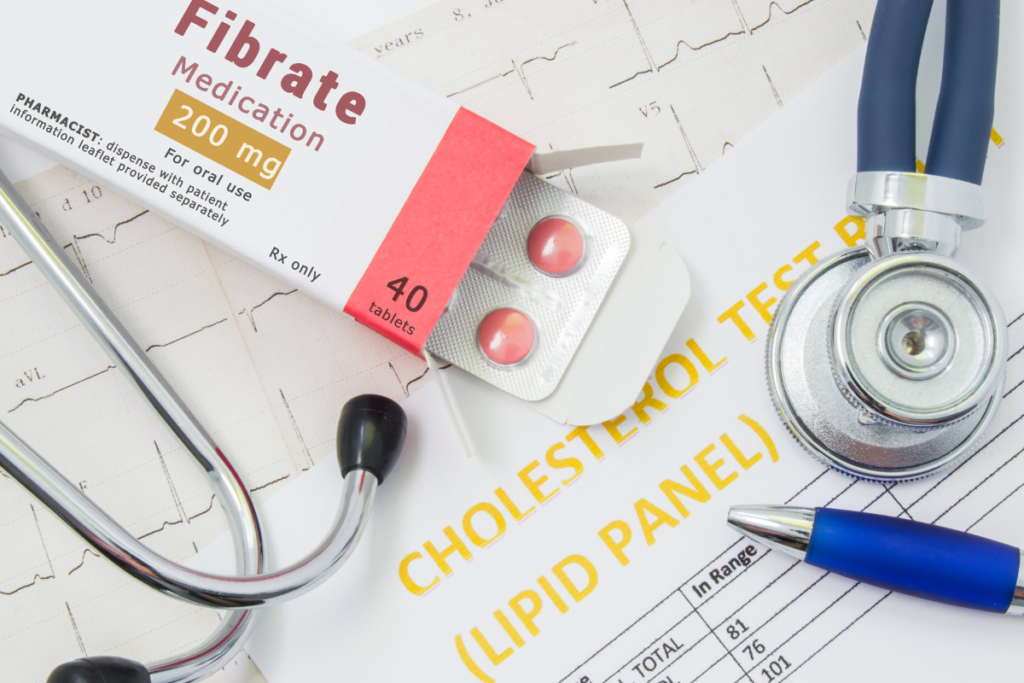 Fibrates are a class of hypolipidemic drugs used in the treatment of dyslipidemia along with changed diet and other non-pharmacological measures. Fibrates were first synthesized in 1950’ where they’ve expressed their hypocholesterolemic effects. The first used drug of this class, called clofibrate was founded in 1962 by Thorp and Waring and it was approved for the treatment of hyperlipidemias in 1967 in the United States. The true mechanism of its action was not known for many years after that, but it was described in the 90’. A derivative of clofibrate with better pharmaceutical properties, called fenofibrate was synthesized in 1974 and many other drugs from this class were developed in the 70’ and 80’. 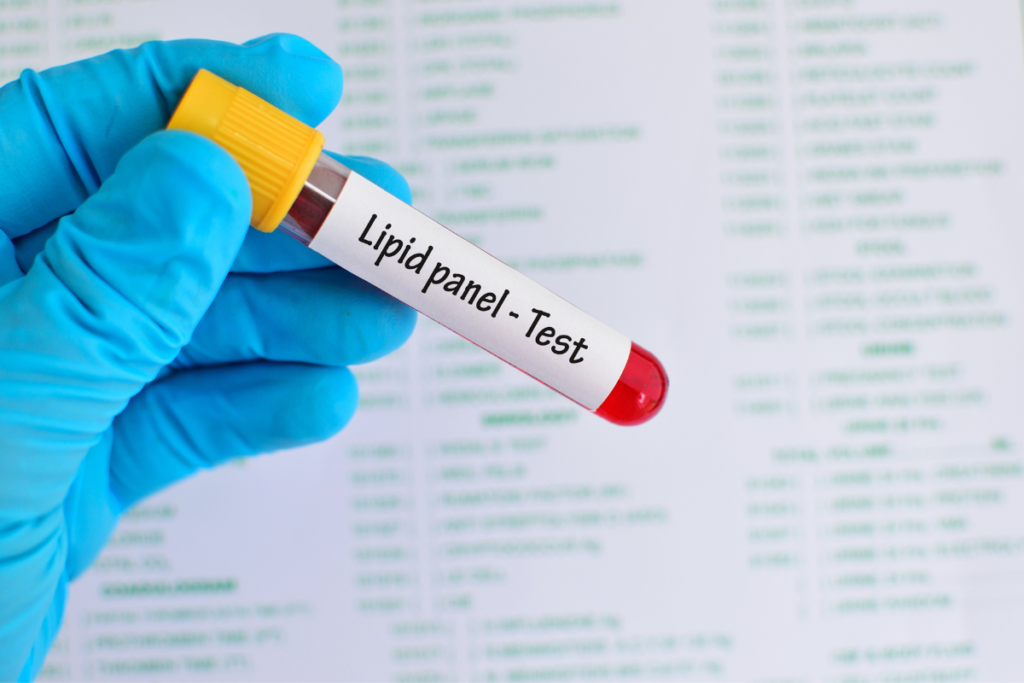 Lipid metabolism is a process that involves all stages through which lipids go inside the organism. Lipids can be absorbed from food, or synthesized in the liver, and then used as energy or stored in fat tissue. Enzymes that breakdown the lipids are called lipases. Lipid digestion starts inside the mouth by lingual lipase, then it is continued in the stomach by the gastric lipase, but the most of the lipids are digested and absorbed in the small intestine, where lipases from pancreas breakdown the triglycerides into fatty acids and glycerol.

For them to be absorbed, they need to form micelles, consisted of fatty acids, cholesterol, glycerol, lipid-soluble vitamins, bile acids, monoacylglycerols, and phospholipids. The emulsification, process of micelle-forming is helped by bile acids and gut motion. When absorbed, fatty acids and monoglycerides again form triglycerides and along with cholesterol get packed into chylomicrons. Chylomicrons transport lipids through the circulation to adipose tissues. They’re mostly consisted of triglycerides (85-90%), while cholesterol is in a lesser concentration. As regards to synthesized lipids, they are transported with very-low-density lipoproteins (VLDL). The enzyme that breaks triglycerides in tissues where they’re used as energy, or for storage in adipose tissue is called lipoprotein lipase.

Fibrates chemically represent the derivatives of fibric acid. Some of the most used representatives of this drug class are fenofibrate and gemfibrozil. Other drugs of this class include bezafibrate, ciprofibrate, clofibrate, simfibrate, and others.

Fibrates are used in the treatment of several metabolic disorders, mainly those associated with dyslipidemia. They are prescribed as second-line drug choice in hypertriglyceridemia when diet change and non-pharmacological measures don’t help, and in people with low HDL-C levels with hypercholesterolemia or dyslipidemia.

Hypertriglyceridemia represents a state of increased levels of triglycerides in the blood. This condition increases the risk of coronary artery disease, and it is mainly caused by a sedentary lifestyle, obesity, or diabetes type II. Triglycerides don’t cause atherosclerosis on themselves, but the cholesterol in VLDLs may induce the atherosclerotic plaque forming, especially when LDL-C / HDL-C ration surpasses the value of 5, and triglyceride levels are above 2.3 mmol/L. High level of triglycerides increases the chance of acute pancreatitis when its level is above 5.7 mmol/L and significantly increases if it’s above 11.3 mmol/L. If hypertriglyceridemia is not regulated with lifestyle modifications, the first drugs to be introduced in therapy are fibrates. They lower the triglyceride levels by approximately 50%.

Fibrates should be avoided in certain states and conditions as they could worsen them. Some important ones include liver disease, biliary cirrhosis, kidney failure, and gallbladder disease.

Liver failure, also called hepatic failure is a type of a problem when a part of the liver gets damaged beyond its ability to repair itself, so it loses its function. Fibrates shouldn’t be used in this condition as they can induce hepatotoxic effect, damaging the already affected liver, potentially worsening the liver failure. Like statins, they can cause an elevation in liver enzymes, but it is mostly mild and without symptoms.

Biliary cirrhosis is a condition when bile ducts in the liver get damaged over time, leading to accumulation of bile and other toxins in the liver, leading to liver scarring, fibrosis, and cirrhosis. Fibrates can cause an additional elevation in already elevated cholesterol in these patients.

Kidney failure, also known as renal failure represents a disorder of kidneys where their function gets impaired, reducing the ability to eliminate toxic substances and wastes from the organism. Fibrates are contraindicated in this condition as kidneys represent their main way of elimination, so a toxic amount of these drugs may accumulate leading to expression of side effects.

Gallbladder disease represents a group of diseases affecting the gallbladder. The gallbladder is a small hollow organ located beneath the liver, whose function is to store digestive fluid called bile that is released in the small intestine. Cholelithiasis (gallstones) occur if the bile solidifies. Fibrates are contraindicated in this condition, as they can worsen it by causing more cholesterol to be excreted into the gallbladder.

Fibrates are generally well-tolerated drugs, but like all other drugs, fibrates can express some side effects in certain patients. Some of the most important ones include:

Fibrates can come in interaction with other drugs, so it’s important to tell your doctor or your pharmacist which drugs are you using. Some of the important interactions include the ones between fibrates and:

Statins are most commonly used hypolipemic drugs, used to treat hypercholesterolemia. If they’re used at the same time as fibrates, a chance for rhabdomyolysis increases, as fibrates (especially gemfibrozil) can interfere with the elimination of statins.

Oral anticoagulants are used to prevent blood clotting and reduce the chance of life-threatening events. Fibrates may enhance the effect of anticoagulant drugs, increasing their chance to cause bleeding. The dose of an oral anticoagulant agent should be reduced initially by one-third or one-half, and then adjusted according to INR.

Cyclosporine is an immunosuppressant used in the treatment of various conditions. It can sometimes express nephrotoxic effects, leading to kidney injury. As the main way of fibrates’ elimination is via kidneys, this condition can induce fibrates toxicity.

Colchicine is a medicine used in the treatment of gout. Simultaneous use of colchicine with fibrates may increase the risk of myopathy, as both these substances express some myotoxic properties. These medications should be used with caution.