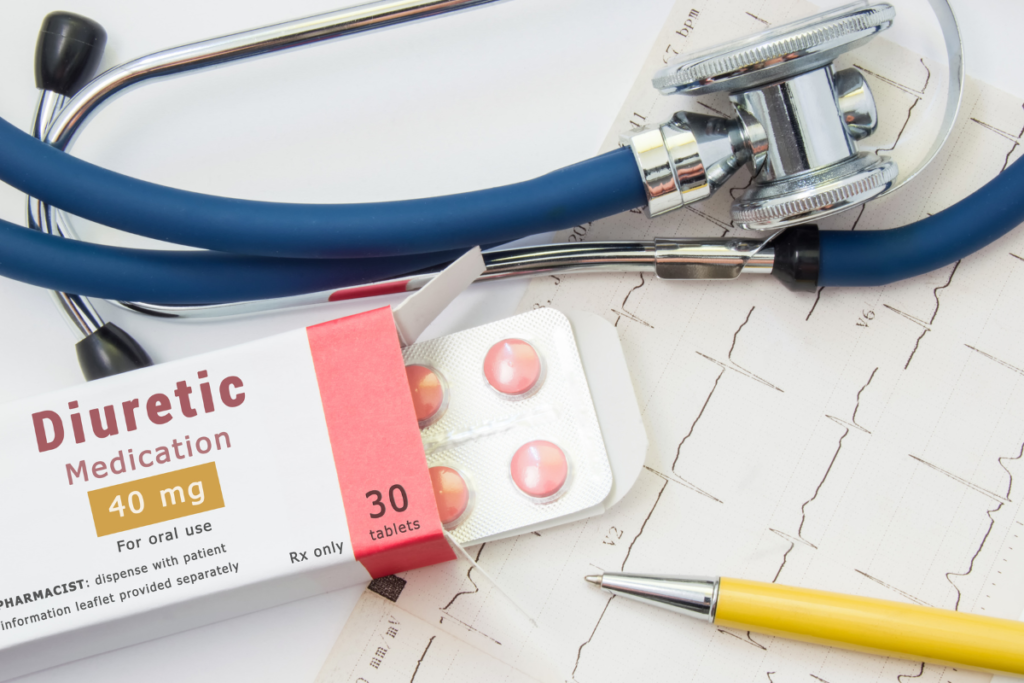 Diuretics (water pills) are a drug class that is commonly prescribed in conditions that require additional water and sodium loss. In the early 40’ Dr. Henry Schroeder found that the limitation of sodium intake is relieving the edemas in patients with heart failure. Beyer, Sprague, Baer, and Novello developed a thiazide diuretic named, chlorothiazide in 1955, and it was released 1958, showing effects in edema relieving and lowering of blood pressure. The loop diuretic furosemide was discovered in 1962, but it was released a couple of years later. The drug was very successful, gaining recognition globally. With regard to potassium-sparing diuretics, spironolactone, an antimineralocorticoid, was synthesized in 1957, but it was patented several years later, and triamterene, studied in 1961. was launched in 1964. 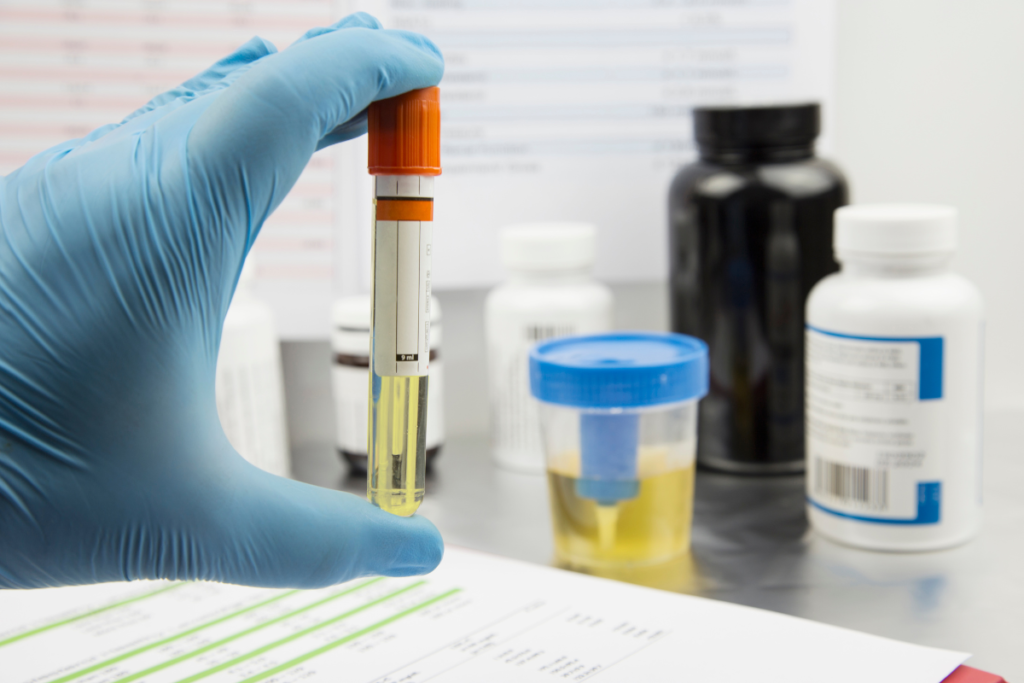 The blood flow through the kidneys is very high, meaning that it receives a 15 – 30% of the cardiac output (mainly 20%). Many factors affect the kidney blood flow, but the crucial one is the sympathetic innervation. The 3 processes included in urine formation are glomerular filtration, tubular reabsorption, and tubular secretion.

The main structural unit of a kidney is called nephron. It is made from a renal corpuscle and renal tubule. The renal corpuscle is a site where blood filtration happens. It consists of the glomerulus, a network of arterial capillaries, and of the Bowman’s capsule, which surrounds the glomerulus, also known as a glomerular capsule. The renal tubule is made from 3 successive, anatomically different parts. They include proximal tubule, the loop of Henle, and distal convoluted tubule which is connected to the cortical collecting duct via the connecting tubule.

The first step of urine formation is called glomerular filtration, and it occurs in renal corpuscle. Because of the high hydrostatic pressure in glomerular capillaries, the blood is filtered into the interior of Bowman’s capsule, called Bowman’s space, and then into the tubules. This process is not selective, as the filtration includes organism’s essential elements, as well as the waste, but the glomerular filtrate does not contain blood cells and large proteins.

Tubular reabsorption is the process which reclaims the substances from the tubule back to peritubular capillaries, tiny blood vessels that travel along the nephrons, allowing reabsorption and secretion. This is a selective process, as most of the essential elements such as glucose, amino acids, electrolytes, and water are being saved in the organism. Tubular secretion is the movement of the substances opposite from reabsorption. Tubular cells accept some substances from blood and pass it to the tubular liquid, while some elements like H+ and NH3 are formed inside those cells, and then secreted into the tubular lumen.

Filtrated Na+ is mostly reabsorbed from the proximal tubule, and its reabsorption is evenly maintained until the collecting tubule. The process of reabsorption is favored by an electrochemical driving force, and in the proximal tubule it is conducted by sodium cotransporters (symporters) with organic molecules like amino acids or glucose, as well as with inorganic molecules like the PO43- ion, and by a sodium-hydrogen antiporter, meaning that for every reabsorbed Na+, transporter ejects one H+. In the ascending limb of the loop of Henle, Na+ is reabsorbed by Na+-K+-2Cl– cotransporter, and Na+-H+ antiporter, and the Na+Cl– cotransporter is responsible for reabsorption of Na+ in the distal convoluted tubule.

Types and mechanisms of action 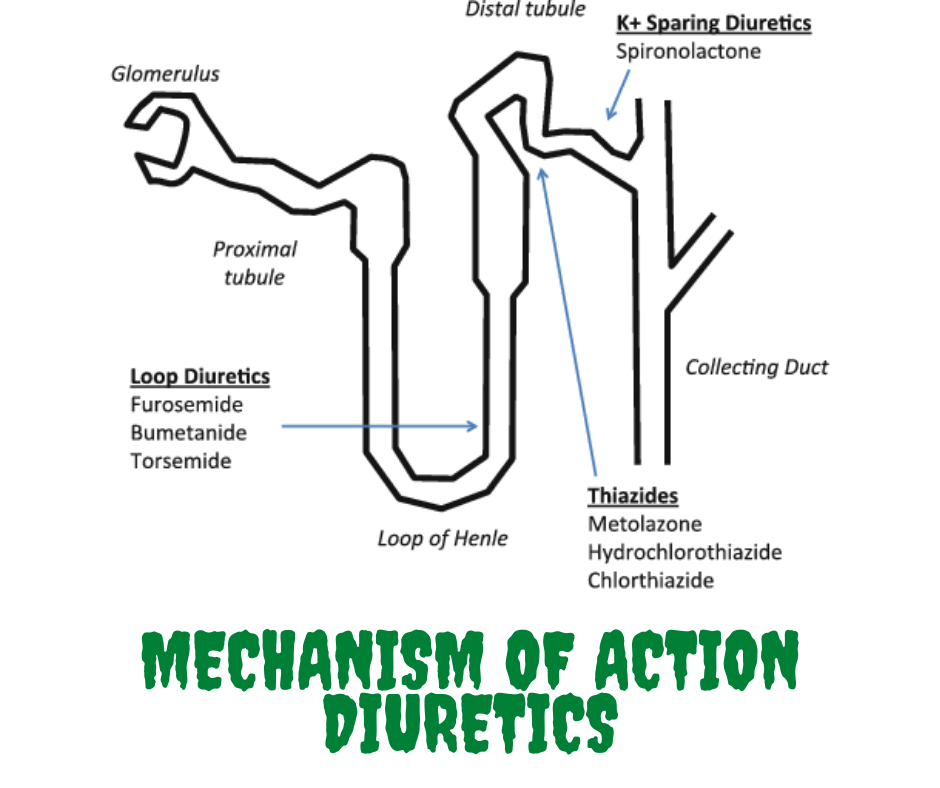 There are several types of diuretic drugs, but the 3 main types are thiazides, loop diuretics, and potassium-sparing diuretics. All diuretics cause the body to excrete more fluids as urine.

Thiazide and thiazide-like diuretic have lower effectiveness than loop diuretics, causing a natriuresis of 5% of the filtered sodium ions. This group includes chlorothiazide, chlorthalidone, hydrochlorothiazide, indapamide, and metolazone. They act on distal convoluted tubule of a nephron inhibiting the reabsorption of sodium and chloride ions by blocking the Na+-Cl– cotransporter, thus inducing natriuresis and loss of fluids.

Loop diuretics are the most potent diuretics available. They cause a natriuresis of 15-25% of the filtered Na+. The examples of loop diuretics are furosemide, bumetanide, torsemide, and ethacrynic acid. Loop diuretics inhibit sodium, potassium and chloride ion reabsorption by blocking the Na+-K+-2Cl– cotransporter in the thick ascending limb of the loop of Henle.

Potassium-sparing diuretics have a low diuretic effect, responsible for natriuresis of approximately 2% of the filtered Na+. This group of diuretics doesn’t cause a loss of potassium. The examples of this group are spironolactone, eplerenone, amiloride, and triamterene. Spironolactone and eplerenone are aldosterone antagonists, meaning that they competitively bind to mineralocorticoid receptors in distal tubules and collecting duct of the nephron.  Amiloride and triamterene block the epithelial sodium channels, thus prevent the reabsorption of sodium and the loss of potassium.

Diuretics are often used in hypertension to lower blood pressure. As they decrease the amount of water in organism they are also used in heart failure and other conditions that include tissue swelling such as pulmonary edema. Certain kidney disorders, including ones associated with the kidney stones (nephrolithiasis), also may indicate the use of diuretics. Other non-cardiovascular use of diuretics is in liver failure. 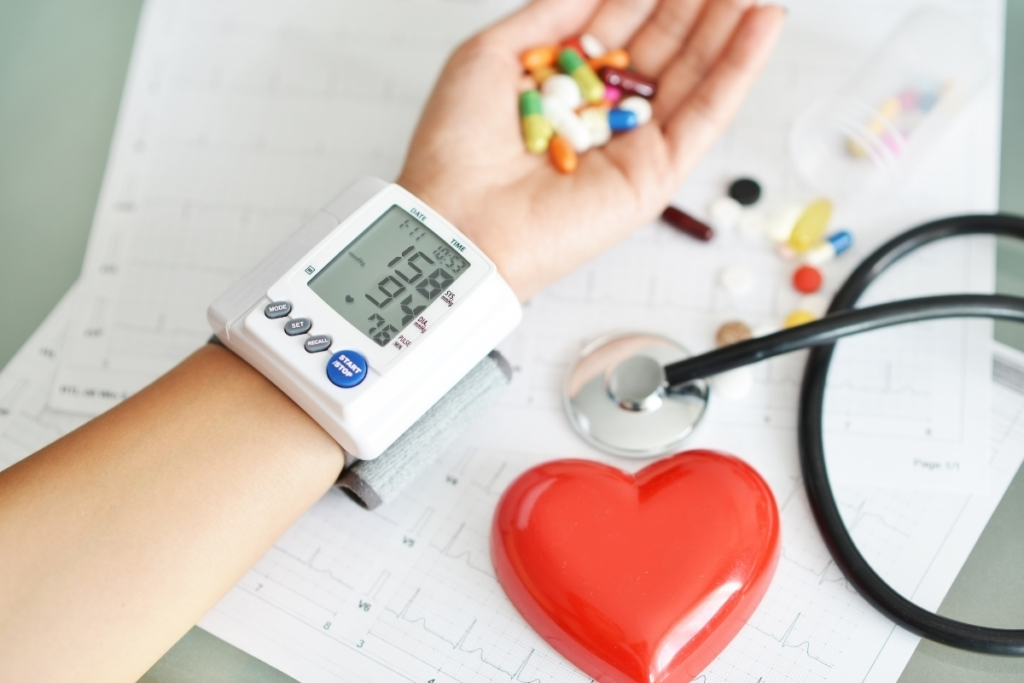 Hypertension or high blood pressure is a state where the blood pressure exceeds the value of 140 / 90 mm Hg. Besides the calcium channel blockers, thiazides resemble the first line in the treatment of newly diagnosed patients older than 55 years or patients of African descent.

Thiazides can lower the blood pressure for about the 10 mm Hg on their own, but they are often combined with other antihypertensives. They are especially effective in isolated systolic hypertension as well as in hypertension associated with heart failure.

Loop diuretics are less effective in sole hypertension as it comes to compensatory sodium retention in the organism after the end of their effects, while thiazides last longer, reducing organism’s fluid volume and lowering the peripheral resistance (presumably via vasodilation). The conditions that indicate the loop diuretics are hypertension and decreased glomerular filtration (kidney failure, because they increase the synthesis of prostaglandins in kidneys, enhancing their blood flow), heart failure, or edemas, as well as in resistant hypertension. From the class of potassium-sparing diuretics, spironolactone and eplerenone are also used in resistant hypertension treatment, while amiloride and triamterene are usually combined with thiazides, to prevent the excess loss of potassium.

Pulmonary edema is a condition that is caused by fluid accumulation in the lungs. It is provoking a difficulty in breathing, and it may progress into respiratory failure as it decreases the gas exchange in the lungs. This condition is mainly induced by left heart failure. Loop diuretics cause vasodilation which increases the venous capacity, reducing the pressure of left ventricle filling which is especially helpful in pulmonary edema, because those effects show up before diuretic effects.

Heart failure is an inability of the heart to supply the organs and peripheral tissues with oxygen and nutrient-rich blood. Diuretics are helpful in relieving of symptoms in heart failure. The reason is they can improve the tolerance of physical exertion, rapidly managing the dyspnea. Thiazides are used in mild stages of heart failure and in patients with preserved kidney function. In more severe cases, the loop diuretics are needed. They are used in people with impaired kidney function, pulmonary edema, or when thiazide diuretics weren’t effective. Diuretics decrease the volume of blood, lowering the heart’s preload (the amount of ventricular stretch, before a contraction). The potassium-sparing diuretics spironolactone and eplerenone are used to antagonize the aldosterone effect on heart remodeling and fibrosis (which worsen the heart’s function), additionally helping other diuretics in their function.

Certain diuretics shouldn’t be used in some conditions including hypotension, hypokalemia, hyperkalemia, and gout.

Hypotension is abnormally low blood pressure, below 90 / 60 mm Hg. In some cases, it could lead to a life-threatening condition of shock. Diuretics are antihypertensives. They lower the circulating blood in the organism and should not be used in this condition, as well as in hypovolemia (a state of decreased blood volume).

Hypokalemia represents the low potassium levels in the blood. Symptoms include weakness, fatigue, muscle cramps or twitching, constipation. In the worst case, it could lead to a dangerous arrhythmia, which could cause cardiac arrest. Thiazides and loop diuretics decrease the potassium levels, so they are contraindicated in this condition, as opposed to potassium-sparing drugs, which can actually help in this condition.

Hyperkalemia is a high level of potassium in the blood, manifested through the muscle pain, muscle weakness or numbness, and palpitations. In more severe cases it induces serious heart rhythm abnormalities that cause a cardiac arrest. Potassium-sparing diuretics are contraindicated in this condition.

Gout is a form of arthritis that often affects the joint at the base of the big toe. It is characterized by sudden attacks of pain, redness, and swelling in the joints. It is caused by the accumulation of crystals of uric acid salts which induce inflammation and pain. As thiazides and loop diuretics reduce the clearance of uric acid. Moreover, they elevate the uric acid levels in the blood and should be avoided in gout.

Side effects of diuretics

Diuretics are generally safe drugs, but like all other drug types, they can cause some side effects.

Like all other medications, diuretics can interact with other drugs. So it’s important to tell your doctor, or a pharmacist, which medications you are taking.

ACE inhibitors are antihypertensives commonly combined with thiazides, but they shouldn’t be combined with potassium-sparing diuretics, as they can both increase the potassium level, inducing hyperkalemia.

Digoxin is an inotrope drug used to treat atrial fibrillation or heart failure. As its toxicity is worsened in the state of hypokalemia, it shouldn’t be combined with thiazides and loop diuretics.

Nonsteroidal anti-inflammatory drugs can cause fluid retention in the organism, and decrease the effects of diuretics.

Lithium is a drug mainly used to treat bipolar disorder. Diuretics can decrease the clearance of lithium, thus increasing the risk for lithium toxic effect occurrence.