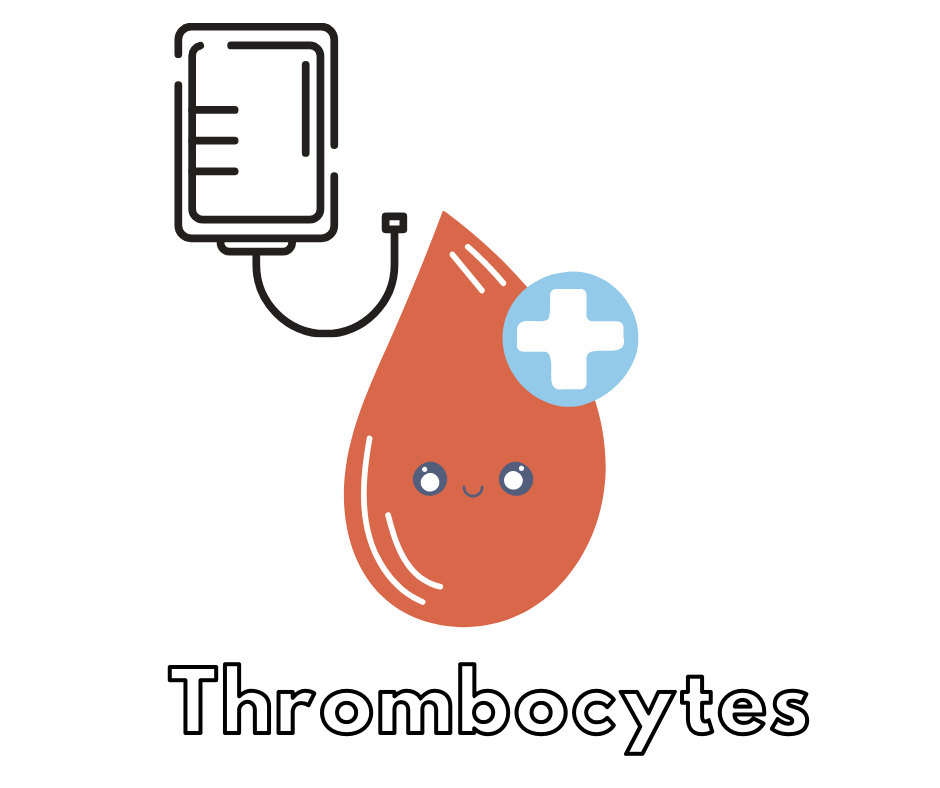 Platelets (Thrombocytes) represent the fragments of the cell called megakaryocyte, which is a type of bone marrow cells sent into the circulation. Thrombocytes are small and oval plates with a diameter of only 2 – 4 mm. Normal platelet count range from 150.000 – 450.000 per μL of blood.

Megakaryocyte comes from hematopoietic stem cell precursors from the bone marrow like all other blood cells. Its transformation into a defined stem is the beginning of the thrombocytopoiesis process.

Megakaryoblast is formed from the myeloid stem cell after which it becomes a megakaryocyte. Due to its large size, a megakaryocyte can‘t leave the bone marrow, but it adheres to the walls of the sinus capillary, partially participating in the formation of its wall. As the cell consists of segments, its parts are separated and put into circulation as platelets.

Several thousand platelets can be made from one megakaryocyte. Moreover, thrombocytes do not come from the normal cell division, as they have no core, and in the true sense of the word, they are not cells. Therefore, the more adequate name is platelet.

Platelet maturation is regulated by factors of colony growth that controls the production of megakaryocytes.

In addition to that, a plasma protein which facilitates the maturation of megakaryocytes and their fragmentation called thrombopoietin is constantly being generated in the liver and kidneys.

Platelets have a very complex structure. Their membrane consists of three layers including

The outer shell – which is responsible for platelet adhesion and aggregation

The inner layer – which is responsible for the platelet shape

Platelet cytoplasm also has a very complex structure. It contains an open channel system responsible for the discharge of the platelet granules’ content into the outer environment. Moreover, the cytoplasm contains a powerful contractile system that allows an easy change in the platelet‘s shape.

Role in the organism

The main role of platelets is in hemostasis, a process of bleeding stopping in an injured blood vessel. Hemostasis is a process that reduces or prevents blood loss in times of blood vessel injuries. As the blood in the blood vessels is under pressure, cutting or spraying the blood vessel results in blood leakage, and this phenomenon is called bleeding (hemorrhage).

If a small blood vessel is injured, bleeding is usually spontaneously stopped by the hemostasis process. However, in the case of injuries of large arteries and veins, hemostasis is not as effective and the injuries must be surgically sanitized. After the damage to the wall of the blood vessel, blood clots accumulate at the site of the injury where they

1. Liberate the substances that cause the blood vessel to contract, which reduces the blood loss

2. Form an aggregate, a platelet plug at the site of the injury

3. Participate in the process of blood clotting, due to coagulation factors that contain

4. Take part in the healing of the injury.

Platelets begin to adhere to collagen fibers within a few seconds after the occurrence of the damage to the inner part of a blood vessel, and that process is called platelet adhesion.

Adhered platelets are activated and they alter their shape while emptying their granules that stimulate further aggregation. The interconnection of a large number of platelets at the site of a blood vessel injury is called platelet aggregation.

Circulating platelets have a lifespan of 1 to 2 weeks. Older blood platelets, which are not used during blood clotting, are destroyed by macrophages from liver and spleen. A spleen is not just a place which destroys old platelets, as it is also an important reservoir of these blood elements. It releases a large number of stored platelets into the circulation under the influence of the nervous system in certain occurrences including bleeding or burns.